FacebookTwitterLinkedInRedditWhatsappGoogle+TumblrPinterest
Welcome home – „my home is my castle“ 28.11.2018, Mucca Munich

Globalisation and digitalisation have fundamentally changed our lives, and pose major challenges to the world of work and people’s mobility. Studying abroad for a semester, working abroad for a certain period of time on a project – temporary living has become part of everyday life in a global, urban lifestyle. But what kind of architecture do we need for it? Which new housing forms and concepts meet the changing needs? What models and thought leaders already exist for the upcoming living models and prototypes, and what still needs to be developed?

On 28 November 2018, around 150 guests listened to the keynote lectures by interdisciplinary experts in the Mucca in Munich’s Creative Quarter, each of which provided insights from different perspectives into the living worlds of the future, current developments and projects relating to the topic of co-living.

In addition to a series of residential projects, Johann Spengler from Steidle Architekten, who won the design competition for the Munich Urban Colab being built by UnternehmerTUM in cooperation with the city of Munich in Munich’s Creative Quarter, outlined the current state of planning. From 2020 onwards, start-ups, corporate innovators, scientists and creative people from various industries and disciplines will work together under one roof on intelligent technologies and services for the city of the future.

„What goes through your mind when you think of the future of living? Skyscrapers, smart homes, flying beds?“ Stefan Breit, futurologist at the Gottlieb Duttweiler Institute (GDI) in Zurich and co-author of a study on the subject of micro-living, kicked off the event by giving a talk on „my home is my castle“, the start of a three-part series entitled „Welcome home – Co-Living 2020“, organised by UnternehmerTUM, MINI Living and DETAIL, and highlighted the wide gap that exists between the places of yearning depicted by well-known search engines in connection with the topic of „future living“ and the built reality. The traditional 4-person household is being replaced by new, differentiated forms of living. Living is becoming individualised – whether as a single-person household or a shared flat for 10 people. Everything is being tailor-made according to personal wishes, Breit explains. Nevertheless, he believes it will remain important to reflect the need for rootedness. This can come about through community, which can be strengthened, for example, by new concepts such as cluster housing. Many of these changes are not primarily technology-driven, but result from social trends.

Social scientist Moritz Fedkenheuer, who is in charge of various research projects with an architectural or sociological focus, also turned his attention to the question of the „co-living“ of tomorrow. In his talk, he explained the findings from his post-occupancy evaluation of the Cubity living experiment in Frankfurt am Main, in which 12 minimized living boxes are grouped on two levels around a large common room. As a temporary roommate of the group, he was able to share the perspective of the users and witness the discussions and negotiation processes in everyday living in a special way. The open spatial structure and the resulting random encounters promote interaction and thus the strengthening of the community. Fedkenheuer said, however, that minimizing the private sphere in favour of maximizing the common areas requires more than purely spatial programming. The „mindset“ of the residents must also be appropriate for adopting such a living culture, which can in turn create identity. Other advantages and findings of the evaluation are evident: Not only are the users involved in the current design process, planners can also fall back on the knowledge base of surveys and results for future concepts. The findings from the Cubity project and other research work are now being incorporated into a current project on student housing in Heidelberg, which the architectural sociologist is working on together with the architect Hans Drexler.

Hans Drexler of DGJ Architektur is also interested in the question of how new ideas for communal living can be put into practice in his research work and realised projects – not only from the planners‘ point of view, but also in the dialogue between the residents and the architecture. As an example of this approach, at the IBA Heidelberg presented the Collegium Academicum Project. Initiated by a self-governing student housing community, a new building will be built by 2020 that will offer space for 46 shared apartments for 3-4 persons on four floors. The special feature is the flexible interplay of individual rooms and common areas, which can be redesigned according to the usage requirements using convertible wall elements. In this way, different layers, from private to public, are possible within each of the 46 living spaces.

„Co-existing or co-living?“ This was the question that Prof. Markus Frenzl from the Munich University of Applied Sciences asked himself when searching for a definition of „community“, adding provocatively: „Is the sharing of a common space synonymous with the sharing of common values?“ After all, space alone doesn’t create a community. What, therefore, are the triggers for generating communication? Based on current student papers at the Munich University of Applied Sciences, he presented various projects and their focus on community aspects – from the FoodLab for collectively utilised crop surpluses to the Manifesto of the 9 requirements for urban spaces.

Architect Christian Hadaller, a board member of the Kooperative Großstadt eG cooperative founded in 2015, explained how the formulation of wishes and goals could be transferred into an actual space. The new San Riemo building in Munich’s Riem district is the cooperative’s first project based on a series of principles to optimise the link between the building, the neighbourhood and the city. Here he has elegantly resolved the alleged contradiction between the credo „my home is my castle“ and the concept of co-living by declaring the private retreat area as the core of an apartment and a kind of fixed basic function. According to the cooperative, the question of communal living doesn’t relate to the implementation of the individual living areas, but instead to the sustainability of residential buildings that offer flexibility and networking on a functional, social and spatial level. One example of this are the so-called staircase rooms in the San Riemo project, which offer a range of possibilities for organising everyday community life as variable switchover rooms and also keep the building active as a network of connected spaces.

The team led by Oke Hauser, architect and creative lead for MINI LIVING, is pursuing a similar approach. True to MINI’s brand motto „Creative Use of Space“, the Mini Living initiative has since 2016 been exploring new living concepts in urban areas. In cooperation with international architects, various co-living installations have been created at various locations, each corresponding in its own way to the context. In all of the concepts and some of the projects already realised, the focus has not been on the size of the spaces, but always on how architecture can contribute to a better urban life.

Architect Johanna Meyer-Grohbrügge of June14 Meyer-Grohbrügge & Chermayeff incorporates her experiences of living and working in Tokyo, Japan into her projects. The component project in Kurfürstenstrasse in Berlin which she presented is a prototype for an extreme residential approach that focuses on how spaces can be meaningfully divided – and not just the traditional ground-floor communal area. Six vertical volumes have been created along a corner building, in the overlapping area of which various spatial situations – horizontally and vertically intersected – arise. The real highlight is that the building is planned without separating walls. Only the zoning through height differences and the spatial interplay through the basic structure visually separates the living areas and allows for flexible use of the resulting areas, whether communal or private.

The final speaker on this inspiring evening has also been brave enough to experiment: Gregor Wöltje, co-founder and managing director of the world’s first pop-up hotel, „The Lovelace – A Hotel Happening“, a temporary use in an office building in downtown Munich. Wöltje took the audience on an exciting journey between pop and politics, art and commerce, society and the individual, and far beyond the actual use as a hotel.

After the stimulating presentations, the participants used the subsequent get-together for intensive dialogue and informal networking among each other as well as with the speakers and partners. The event will be continued in March 2019 under the headings „have we met?“ and „coming soon… Creative Quarter“. 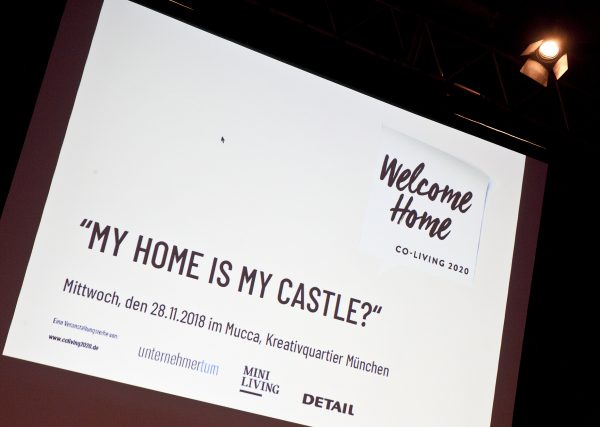 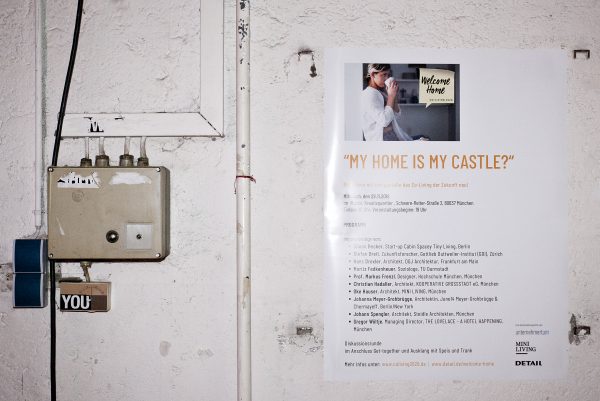 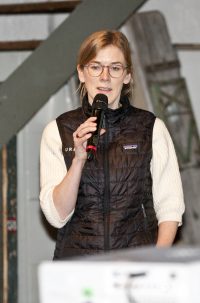 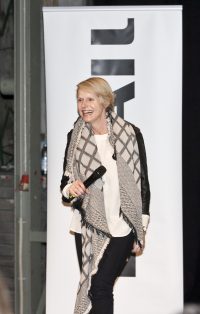 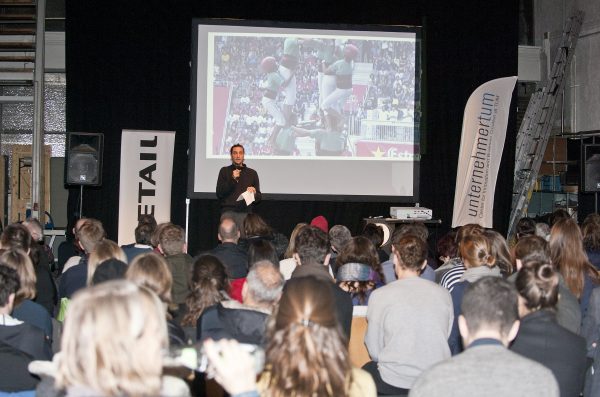 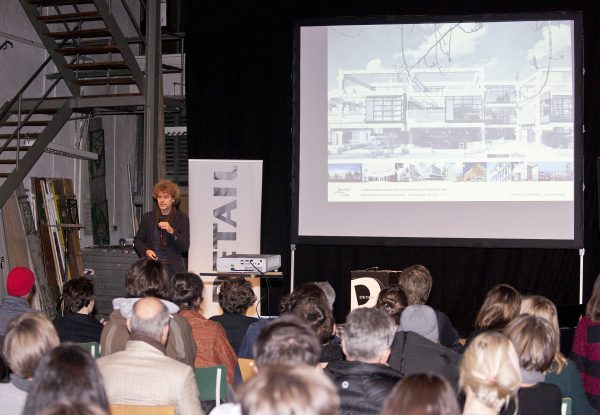 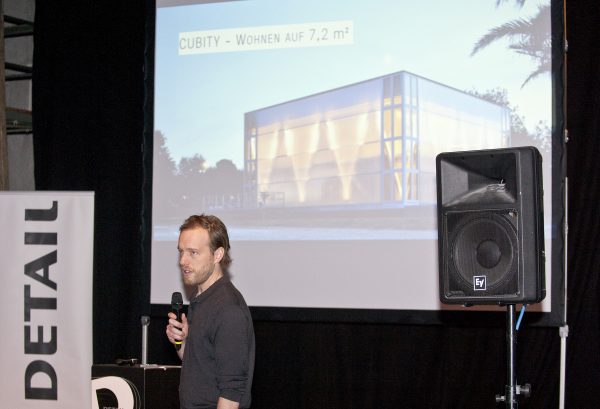 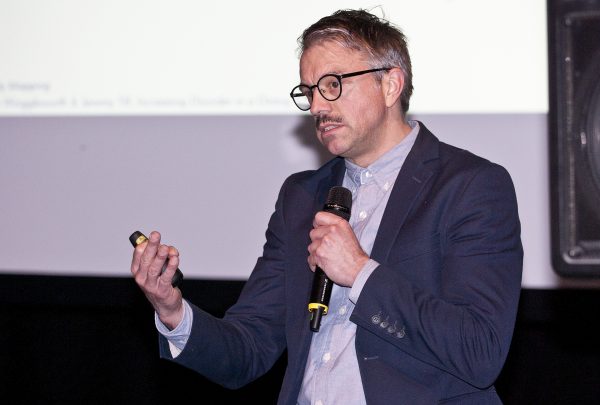 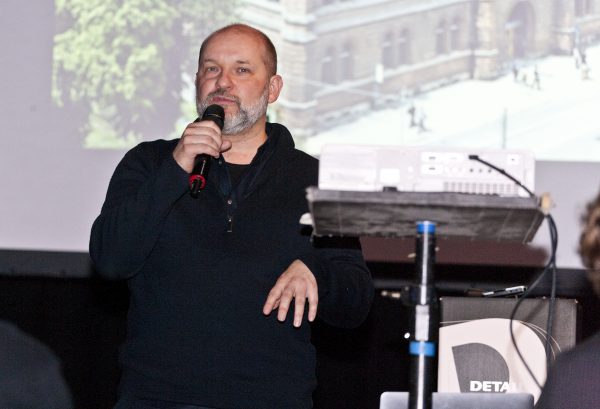 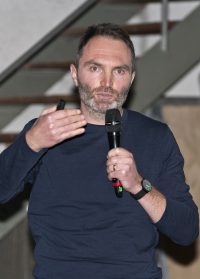 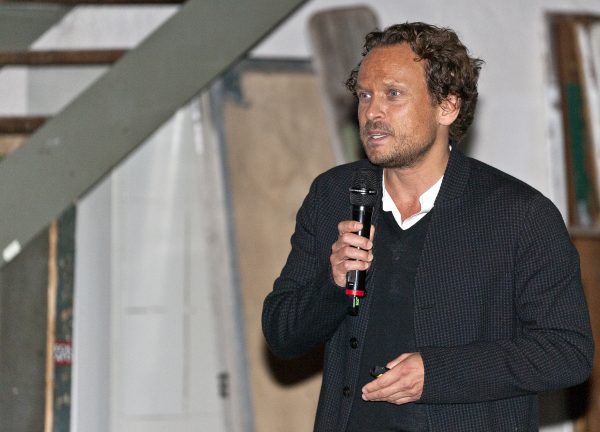 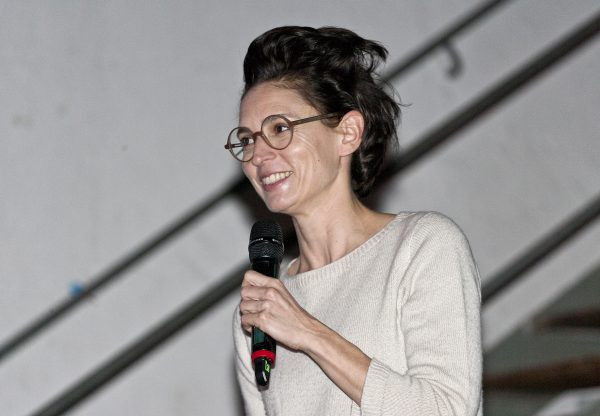 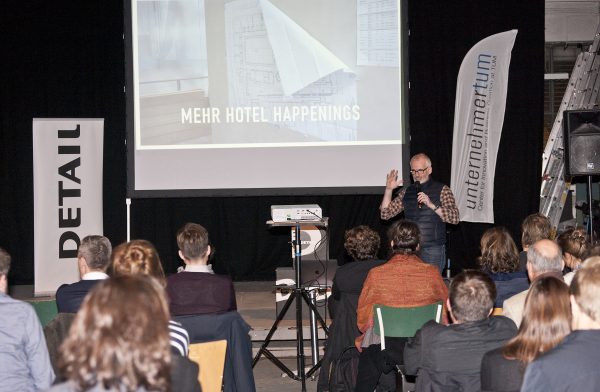 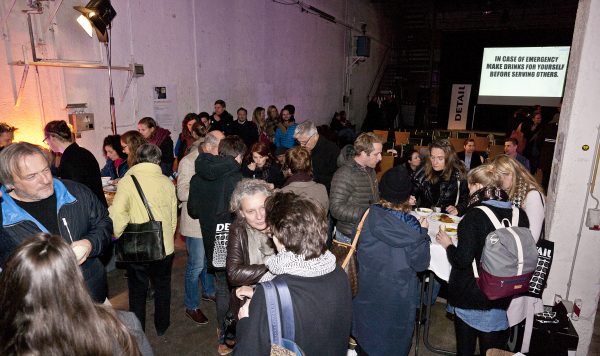 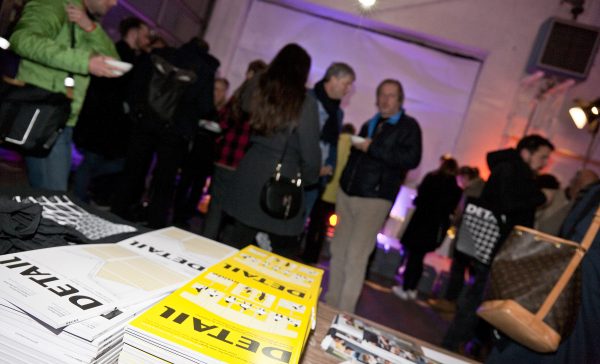 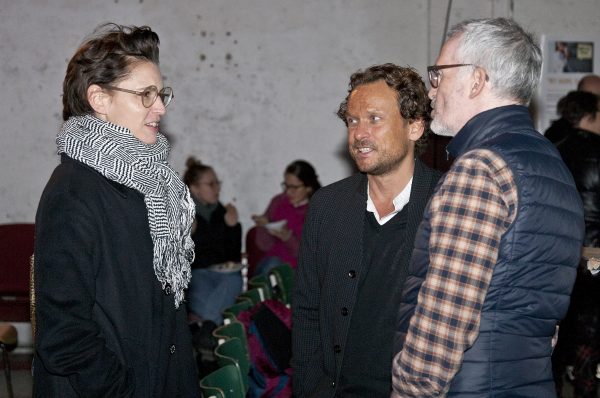 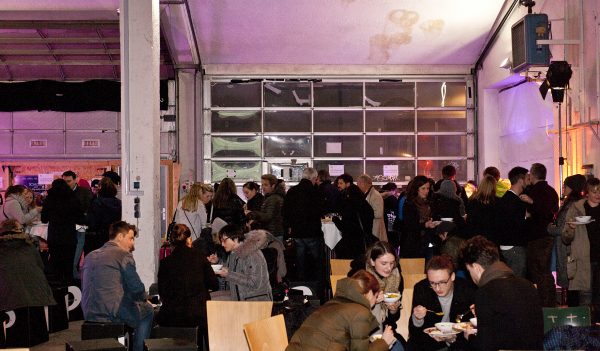